Mumbai, India – In the last few months, Neetee Clothing, a small manufacturer and exporter of fashion apparel based in Gurgaon, has cut back its working capital loan from its bank by a whopping 80 percent as India’s central bank has hiked interest rates twice since May in an effort to tame soaring inflation.

While the company is dipping into its cash reserves for now, managing director Animesh Saxena told Al Jazeera he is worried that that may not be a sustainable strategy in the months ahead when the peak season for his business kicks in.

“We are worried about the peak season again, which is October-November, when we will have to buy a lot of raw material and by the time shipping happens and payment starts coming there is a delay of four to five months,” he said.

Saxena is not alone. Rapid hikes in loan rates in India are prompting many medium, small and micro-businesses (MSMEs) across the country to cut back their dependence on institutional loans as they are unable to bear the increased interest cost.

That is the latest challenge to these companies, which, for the past couple of years have already seen their profit margins shrink with a rise in raw materials costs and a slowdown in demand on the back of the pandemic and the Ukraine-Russia war. Now, analysts are worried about how long before these companies burn out their internal sources of finance and are left gasping for breath.

Since May the Reserve Bank of India has hiked the repo rate twice by a total of 90 basis points, displaying a sense of urgency in order to reign in inflation that has soared to unprecedented levels.

A September 2019 change in banking policy means that small and medium businesses, which till then were borrowing loans at a rate set according to the bank’s marginal cost of loans – the minimum lending rate – will now borrow at a rate linked directly to the repo rate. In other words, these small businesses will see the interest on their loans rise, or fall, instantly with every change in the repo rate by the central bank.  As of December 2021, 69.2 percent of outstanding loans to MSMEs are priced at a rate linked to the repo rate, as compared with 1.8 percent at the time of the rule change.

Of all the loans given to businesses, MSMEs have the largest share of loans to be linked to the repo rate so closely. That makes these small businesses – which employ about 120 million people and contribute about 30 percent to India’s gross domestic product earning them the moniker “backbone of the national economic structure” – more vulnerable to higher interest burdens with every increase. 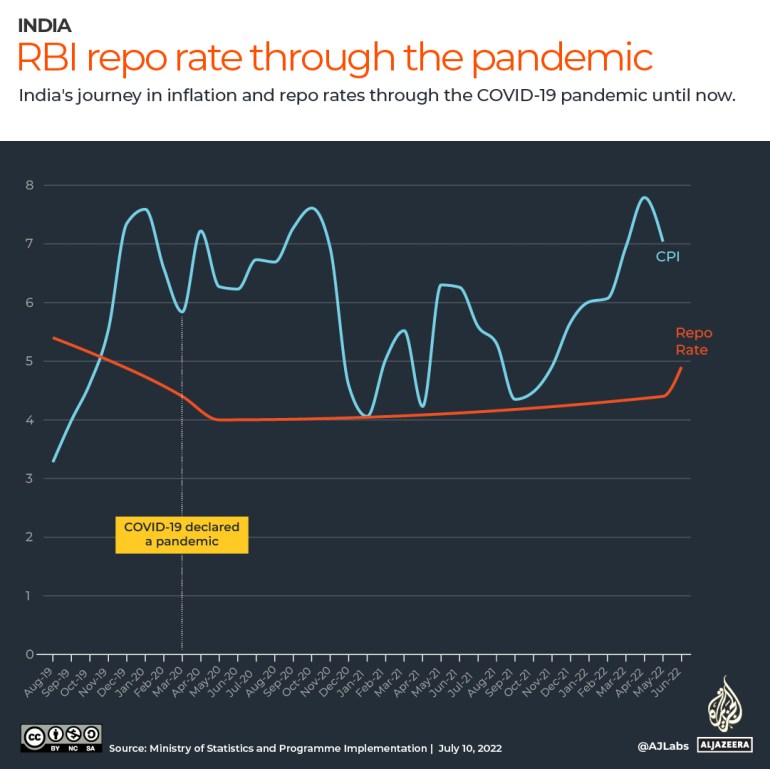 High input costs and broad weakness in demand have led to operational challenges for MSMEs as profit margins shrink. Niyogi points out that while the cost of loans is on its way up, companies’ requirement for loans is also increasing, given higher working capital needs.

Neeraj Kedia, managing director at Chakradhar Chemicals, a medium–sized company that manufactures micronutrient and soluble fertilisers, and farm equipment, said that the company has started reducing its share of working capital debt because it cannot afford such high interest rate costs.

This is even though Kedia’s business did not face many difficulties during the past couple of years because industries such as fertilisers, pharmaceuticals and food did fairly well through the pandemic.

This is unlike Saxena’s textile business, which was not spared. A sharp rise in input costs – raw cotton was up 100 percent – in the past one and a half years has left his garment manufacturing company struggling to remain profitable.

The increase in raw material costs was “a blow” as customers were “not willing to accommodate” the entire price increase, Saxena told Al Jazeera. “We had to squeeze in our margins and our production cost,” and that meant that while the cost of their finished products went up nearly 25 percent, they could increase the buyer’s price only by about 15 percent. Now, with bank’s lending rates going up, “the interest cost will also rise and this will be another challenge for us”, he said.

A drop in profit margins apart, experts worry whether these companies will be able to service the loans that they raised in the last two or three years given the aggressive rate hikes expected ahead.

Currently at 4.9 percent – while the repo rate is still below the pre-COVID level of 5.15 percent – analysts expect it to cross that as soon as August. A June 8 SBI research report expects the policy repo rate to rise to 5.25 percent in August and to 5.5 percent in October and expects it to peak at about 5.5-5.75 percent.

As Niyogi puts it, the MSMEs’ malady isn’t rooted in a single factor nor a single Black Swan event such as the war between Russia and Ukraine. A series of unfortunate events have snowballed into the situation today.

MSMEs saw a drop in demand from consumers even before the pandemic hit on the back of demonetisation when the Indian government invalidated most of the currency in a sudden move in November 2016, and by the pan-India goods and services tax that kicked in the following summer.

More recently, the Russia-Ukraine war that began more than four months ago has pushed up commodity prices, including that of fuel, which has seeped into the production cost of nearly every good or service, making inflation more universal. As a result, central banks across the world have been tightening monetary policy in attempts to get a grip on domestic inflation.

For India, global oil prices are a larger cause of concern as the country imports nearly all its requirements which, apart from burning a hole in its balance of trade account, also cheapens its currency, making imports more expensive.

For MSMEs, as for other segments, while the raw material costs have gone up, high inflation has also led to consumers holding off spending on non-essential items, hitting company profits.

Anil Bharadwaj, secretary general of industry body the Federation of Indian Micro, Small and Medium Enterprises (FISME), says the prices of raw materials, whether they be steel, copper, aluminium or plastic raw materials, have increased anywhere between 30-40 percent and, in some cases, as much as 100 percent, limiting the money available for day-to-day business.

Add to this higher loan interest rates and he fears that it may cripple some of these companies that had so far survived, including during the early months of the pandemic when India was locked down to curb the spread of the virus.

“Especially for the companies that were leveraged, who had taken term loans during the last five to seven years, this 90 bps rise in interest rates is going to make their lives more difficult,” Bharadwaj told Al Jazeera “It is important to alleviate some of the pain of these MSMEs, otherwise there is a risk of them becoming NPAs [non-performing assets].”

With the first tranche of repayments against the emergency credit guarantee line scheme extended by the government to MSMEs battered during the COVID lockdown due next year, it will be a tough path ahead for several small to mid-sized companies, experts warn.

While interest rate increases are imperative to strike down inflationary pressures, the pace and the amount of hikes have made the situation grim, experts say. Balancing growth, employment and inflation are crucial.

“I do think we have to be careful about how much we hike repo rates,” said Ananth Narayan, associate professor at the S P Jain Institute of Management and Research. “If you hike repo rates rapidly just because market watchers and economists are clamouring for it when you don’t have [companies taking loans], what are you trying to address?”

A rapid rise in interest rates will “risk creating a lot more issues for the real economy and employment generation and MSMEs than you will address inflation. The impact on growth will be a lot more than that on inflation,” he warned.