Strategic island had been under Russian control since the opening stages of the war.

Russia’s defence ministry says its forces have withdrawn from Ukraine’s Snake Island – an announcement hailed by the Ukrainian army as a victory.

Snake Island is a tiny but strategically located Ukrainian islet in the Black Sea that was taken by Russia in the opening stages of its war against Ukraine. 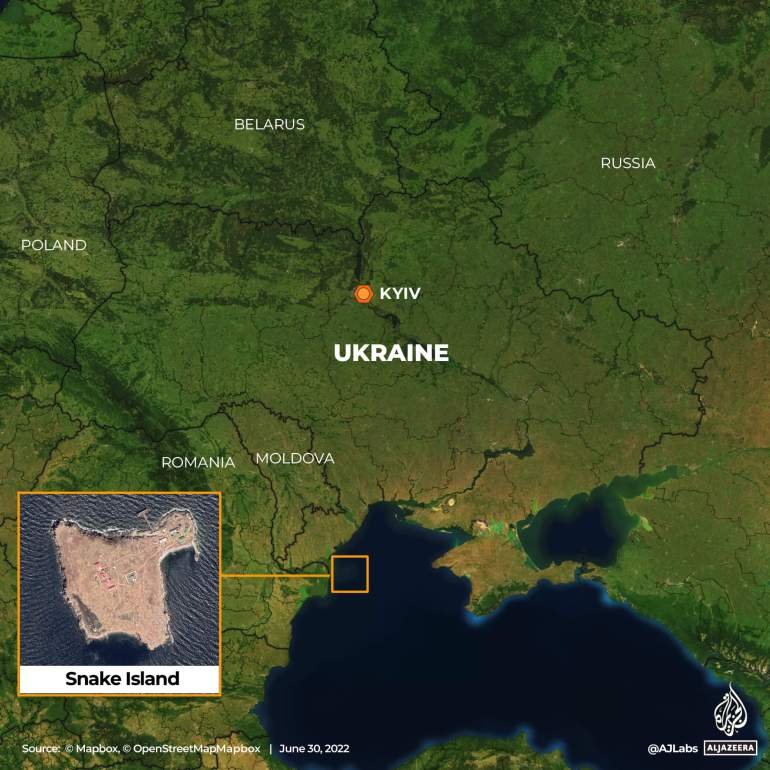 “On June 30, as a gesture of goodwill, the Russian armed forces completed their tasks on Snake Island and withdrew a garrison stationed there,” the ministry said, in an announcement that came after Ukraine stepped up its attacks on the outpost.

The ministry’s statement added that the withdrawal was aimed at demonstrating the world that “Russia is not impeding UN efforts to organise a humanitarian corridor to ship agricultural products from Ukraine”.

Ukraine and Western countries have accused Russia of blockading Ukrainian ports to prevent the exports of grain, contributing to a food crisis that threatens to worsen shortages, hunger and political instability worldwide.

The head of Ukraine’s army hailed the withdrawal of Russian forces.

“I thank the defenders of Odessa region who took maximum measures to liberate a strategically important part of our territory,” Valeriy Zaluzhny, the Ukraine military’s commander-in-chief, said on Telegram.

“KABOOM! No Russian troops on the Snake Island anymore. Our Armed Forces did a great job,” Yermak wrote.

No Russian troops on the Snake Island anymore. Our Armed Forces did a great job.
More kaboom news to follow. All will be 🇺🇦 pic.twitter.com/ItdP3oQvHK

Russia said that the “ball is now in Ukraine’s court”, blaming the pro-Western country for not demining its Black Sea coast.

On Thursday, a first cargo ship left the Russian-occupied Ukrainian port of Berdyansk, a local official said. Moscow said the port had been de-mined and was ready to resume grain shipments.

The United Nations has been trying to broker a deal to resume both Ukrainian food exports and Russian food and fertiliser exports and stave off the risk of “hunger and destitution” for hundreds of millions of people.

Russia’s war in Ukraine has spurred a global food crisis, with prices for grains, cooking oils, fuel and fertiliser soaring. Russia and Ukraine account for nearly a third of global wheat supplies, while Russia is also a key fertiliser exporter and Ukraine is a major exporter of corn and sunflower oil.

Since Russia’s invasion, Ukrainian grain shipments from its Black Sea ports have stalled and more than 20 million tonnes of grain are stuck in silos. Moscow says the chilling effect of Western sanctions imposed on Russia over the war has disrupted its fertiliser and grain exports.

Russian President Vladimir Putin has repeatedly said Russia was ready to facilitate the unhindered export of grain from Ukrainian ports in coordination with Turkey.

The UN estimates that up to 181 million people in 41 countries could face a food crisis or even outright famine if a solution is not found.